About Your Tutor - Glen Tillyard...

I’m an NCTJ qualified, and award winning professional press photographer, with over 30 years’ experience with the Leicester Mercury newspaper. During that time I also worked for ten years as a college tutor and I’ve taught photography and Photoshop at many adult education colleges throughout Leicestershire. I’ve also run specialist photography training courses for the police and charities like the British Red Cross.

After taking voluntary redundancy from the Mercury I now specialise in running photography courses helping beginners to get their cameras off the Full Auto setting and showing them how to take great pictures in just one day.

A few early images from my days at the Leicester Mercury

How it all started

I started photography as a hobby when I was just 15 years old. By age 16 photography had become a bit of an addiction and I began taking pet portrait commissions to fund my growing film habit (I started with Ilford FP4 but soon progressed to Kodak Tri-X, but I could handle it).

By age 17 I discovered I had “an eye for a photo” and started submitting photographs to the Leicester Mercury on a regular basis. Having images in print, with a by-line, was a huge buzz and I started sending in more and more pictures until one day, out of the blue,  I was asked if I would like a job as a trainee photographer. It took about 1/250th second to say yes and the journey had begun.

I started off in the darkroom where I had the enormous privilege to work with over a dozen talented photographers. My first job was to print the photographers’ films in the morning and that enabled me to cherry pick the top techniques from each photographer. This meant my “style” became an amalgam of the best bits of each snapper.

One day a Public Relations Officer (PRO) from the Territorial Army came into the office to ask if any of the photographers would like to do some part-time PR photography for the TA. Everyone in the office pointed at me and said in unison  “He’ll do it”. So I did. Over the next few years I went on to win “Army Photograph of the Year” three times.

By now I had progressed from the darkroom to being full time press photographer and I went off on block release to do my NCTJ training at Sheffield where I got 3 Distinctions and a Credit in my exams. This National Council for the Training of Journalist course was recognised as the best training possible for press photographers and it’s the training I received on this course that is the basis for all our photography courses today.

During my career I have photographed most of the royal family and numerous actors and politicians. I’ve photographed a vast range of professional and amateur sports including: football, rugby, tennis, marathons, hockey, swimming, athletics, gymnastics, volleyball, formula 1, go-karts, stock car racing, motor bikes and even soapbox racers. As a perk of the job I’ve been lucky enough to fly with several air display teams, shoot lots of concerts, tackle assault courses, and abseil down buildings. I’ve risked life and limb climbing tower cranes and colossal factory chimneys. I’ve experienced explosive decompression in a jet simulator and walked through sewers. I’ve been on the scene of horrific events but also shared incredible joyful moments. I’ve photographed babies, just a few minutes old and a centenarian who still walked to the bus stop to visit his lady friend.

I never entered many press photography competitions, and probably should have entered more,  but I was lucky enough to placed in the Kodak and Ilford Press Awards. My finest hour, though, was winning the title 1990 Midland Press of the Year with a portfolio of five images.

My favourite image of the set was taken from was atop a 100 ft high chimney in Knighton, Leicester. A team of steeplejacks were demolishing the structure, one brick at a time, from the top into the centre section. Armed only with a safety hat, a Nikon F2 and a 15mm Fish-eye lens, I was allowed to climb to the top of the chimney. Unfortunately, even with the super wide-angle lens I couldn’t get far enough back to fit the workmen in the frame. The only solution was to hook my feet under the scaffold rail and lean back over the edge. The result was a winning image of the men at work and the city spread out below. With health and safety regulations today there’s no way I would be allowed to do half the things I we did pre-millennium.

After a fantastic 30 year career at the Leicester Mercury, where I progressed from darkroom technician to a spell as picture editor, I finally took voluntary redundancy and called on my vast experience and teaching skills to set up Digital Photography Courses in 2010.

I used to tell people I had the best job in the world and it’s a privilege to pass on my knowledge and experience to my new students and watch them progress. I’m immensely proud of my students and the quality of their images never ceases to amaze me. If you would like see a few samples then take a look at our DPC 52 Week Project on Flickr here  or our amazing 2019 Student Calendar here.

I thoroughly enjoyed the day and after four years of owning a digital camera I’ve learned more in one day than I had in the previous four years put together. At last I understand what I’m doing and I look forward to taking much better photographs. Derek Welsh 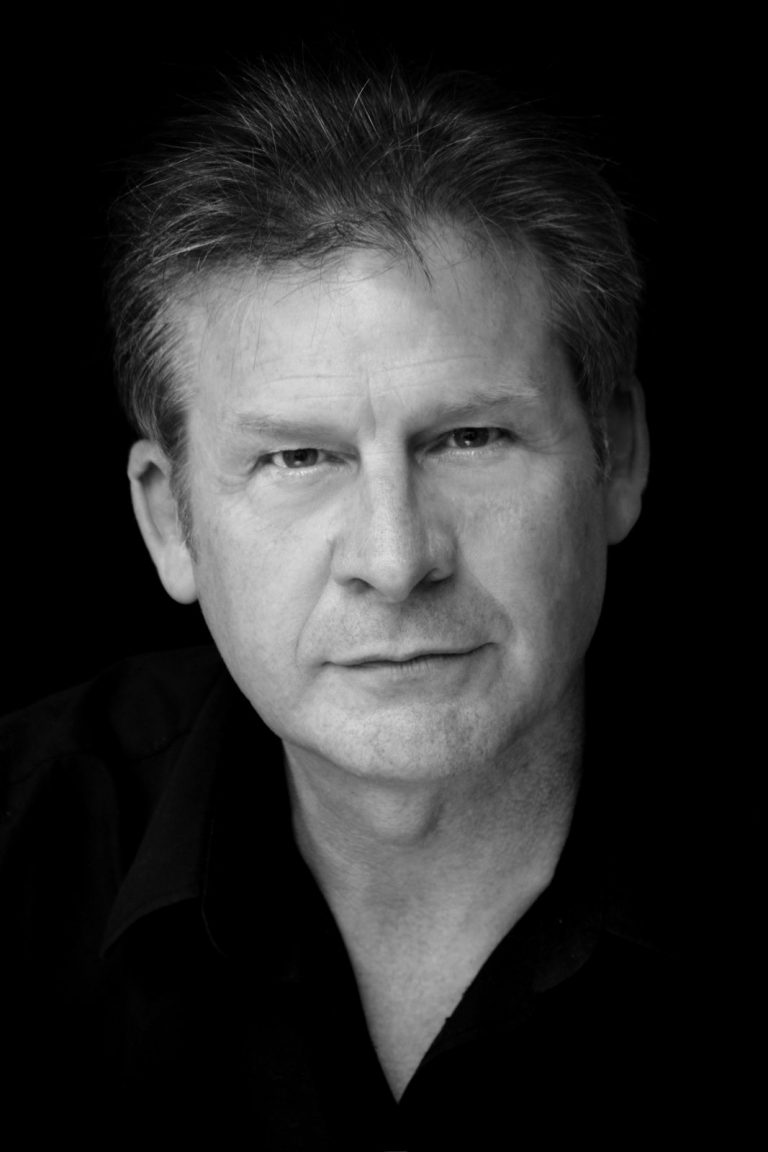 Originally, we started with just the Beginners Photography Course where I explain, in simple jargon free terms “How to get your camera of the Full Auto setting and learn how to take great pictures in just one day”.

Students learnt so much on these beginners course that they started asking for more training to expand their photography knowledge even further. Before long we had added; Intermediate, Night, Portrait, Macro, HDR & RAW, Lightroom and Photoshop. Once students had attended all these they still wanted more so then we started adding niche subjects like Flash Photography, Studio Portraits and the Creative Lighting Courses. On request I’ve also run specialist courses in Action, Horses and Mermaid Photography plus advanced courses in most of the above. Many students have attended all the courses and some have even come back on refresher days just for the fun we have.

As a college tutor I learnt that different students have different learning styles so we use recognised teaching methods to ensure that whatever your needs we’ll aim to get the message across, simply, without using jargon and in a way you can understand. Please don’t take my word for how good these photography courses are but take a few moments to read some of the many testimonials throughout the site.

A recent student, who had been on several other beginners courses with other trainers, expressed it beautifully when he said, “Your courses are like the fast track Formula 1 of courses rather than the go-karts of the other ones I’ve attended.”

The main thing about being a press photographer is you are always working to a deadline. This means you have to get the best pictures, with the least amount of hassle in the shortest possible time. This is something I instill in my training courses today and when I ask students want they really want they say, “They just want to learn how to take great picture easily.”

I believe that photography is one of the best hobbies (or professions) you have and I’m as enthusiastic about it now as when I first started. If you have any questions about photography or buying a camera then I’m happy to answer them without obligation. 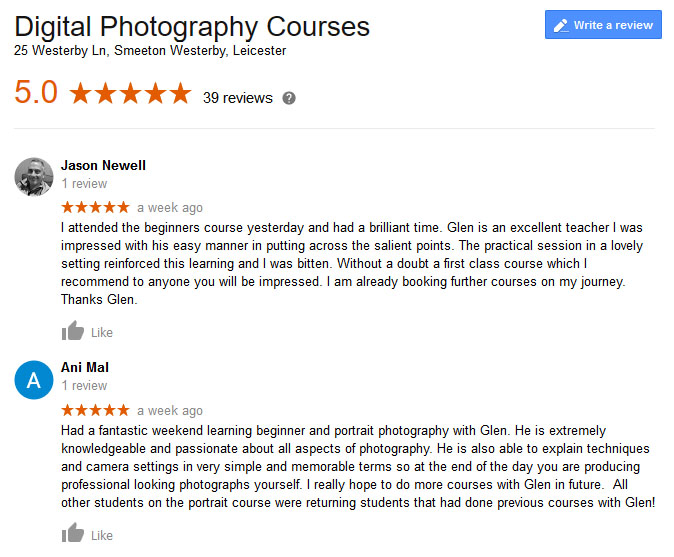 This course was excellent and I learnt an enormous amount. I now feel really confident and cannot wait to go out with my camera and really enjoy it. No more auto settings for me.

“A wonderful photography course with excellent one to one tuition to help me pursue my personnel aims of moving subjects and focusing on difficult objects like flowers and getting the background blurry. I feel much more confident using a wide variety of settings on my camera and I’m very pleased with my pictures. Thank you!”

I love the way Glen gives clear, easily understood guidelines. I feel ready to go out equipped with more knowledge on how to use the camera more effectively plus I will never use Full Auto ever again. Jan Knox.

Glen made the subject easy to understand and I started to feel more confident with the camera immediately. Now to start taking good photos. Dave Bason

Excellent introduction and clearly explained. Good balance of theory and practical. The sensible sized group allowed for individual attention for all the participants questions in a relaxed and friendly atmosphere. Very Good. Gordon Warren.

Fantastic day. Lots of useful information presented in an easily understood way. Not only did I learn how to use my camera but also take great pictures. Lesya Sturman.

Glen’s beginners course was absolutely at the right pace, extremely informative, very clear and made simple for the novice. I feel so much more confident and comfortable experimenting with my camera and look forward to the next course. Wendy Robbins

Glen’s informal and simple way of explaining things was very refreshing. I really did learn a lot and this course has improved my photography already. Highly recommended. Neil Mascall.

Made to feel welcome and comfortable. Very informative at a good speed to learn and retain the information. I will definitely be back for more courses. Thank you.  Carrie Short

Excellent course. Nothing is too much trouble for Glen to explain. Lesley Tailby

Very good and I now understand how I was using my lenses incorrectly. Nick Ford.

Brilliant Course! Initial tuition on understanding the camera made a complex subject very simple. I now understand my camera rather than being frustrated by it. Thank you. Andrew Burgess.

Excellent Course and well worth the trip up from London. Dr Nick Cheese.